Two young boys, one in his late-teens, and the other who just turned 21; giving up on life and taking matters into their own hands.

The reasons surrounding their deaths are anything but straightforward, and the question being asked by everyone who knew the two boys is 'why?'.

It's not certain if they knew each other, for each case happened a few months apart, and the circumstances do differ.

Their families and friends are in shambles, and even though I didn't know either of them, I find my mind running on them boys from time to time.

I wish I knew both boys to tell them that life never stays the same, that every situation, no matter how good or bad, will eventually disappear. That everything will pass.

I wish I could stop them both from doing what they did, and tell them to think about the hurt that they will cause everyone in their life who cares and loves them.

Suicide is a way out of this life, but it is a hard and brutal way, and it cheats everyone of a chance to live with that person, the many years ahead. But now, the family and friends of those left behind will never know what that means.

I pray for the souls of those two young men.

Eternal rest grant unto them O Lord, and may perpetual light shine upon them.

May they rest in peace.

Posted by Cesco Emmanuel at 12:18 AM No comments: Links to this post

Even insects know how to pose for the camera 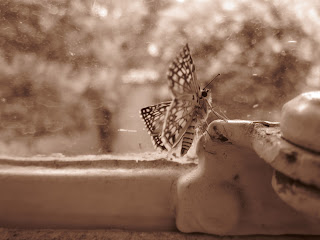 This morning in my kitchen, there was a small moth. I tried to zoom in to take a shot of him, but the resolution was fuzzy. So, I zoomed out the lens, then stepped in close and took this shot. The tiny lil thing didn't even move, it just stood perfectly still.

Maybe it knew, that pretty soon it be on the cover of 'Butterfly Monthly' (if such a thing exists)
Posted by Cesco Emmanuel at 2:52 PM No comments: Links to this post 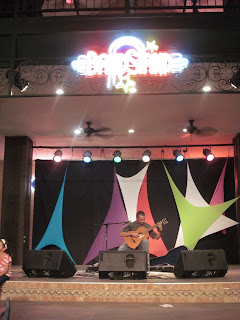 You know, life really is a funny thing. Ever notice sometimes when you think of something it 'mysteriously happens'? Just this past weekend, I was thinking of the last time I did a solo gig in Trinidad (eight years ago), and my last solo performance in Toronto (November, 2008); and I thought 'Man, it sure has been a while, maybe sometime again I'll do one'.

I'm not overly fond of playing solo, I prefer a band format. Playing solo is being in the spotlight, all by yourself, and everyone is looking at YOU to deliver the goods. And it better be good!

So, I put that thought out of my head and went on with my weekend. No harm, it's a thought, nothing else.

Monday morning rolls around and I get a call from the booking agent at Fiesta Plaza in Movie Towne. He says there's an open spot this saturday - October 1st and would I like to play?

Well.......I had to plan a set quickly and let him know before mid-day. And so, it came to pass that I ended up playing last night, at Fiesta Plaza, my first solo gig in Trinidad in eight years.

I was a bit nervous at the start, but that disappeared by the third song. It always takes me a while to get into the swing of things.

The crowd was a sit-down, have dinner/drinks audience. So it was a bit quiet, but I got them to sing along on at least three occasions and they were very appreciative.

Most of my guitar students came and brought their parents. My family and friends came as well, and all in all, I think a good time was had by everyone in attendance.

When's my next show you ask? I have no idea.

We'll see what happens next......
Posted by Cesco Emmanuel at 2:28 PM No comments: Links to this post

I had a lil slap in the face this week. I posted a link to a recording I did back in 1996, with one of my first bands - Brothers Grimm.

I sent it out as a group email on Facebook. Some people replied to the email, which was a nice surprise, but others started 'leaving' the conversation. I started to think maybe I shouldn't have sent out the email in the first place.

What's worse is the people who left were in most cases, long-time fellow musicians. I apologized to everyone on that email for any irritation I might've caused by sending out such an email.

One or two folks replied to say that many people don't like getting notifications from strangers in a group email all the time, and hence they 'leave' the conversation.

I'm trying not to feel a bit slighted by my friends, but it's hard not to. Still, I guess what's done is done and I'll know better next time.

Nevertheless, I do find to take oneself out of an email without at least even sending a 'lil note to the initial sender to say 'Hey, thanks but I don't like being a part of this' more than a bit rude.

But then again, that's just me. I'm sure my 'friends' who deleted themselves from the email thread will say I was more than presumptuous to include them in a group email.

I guess it's all a matter of perception and Internet etiquette.
Posted by Cesco Emmanuel at 2:15 PM No comments: Links to this post