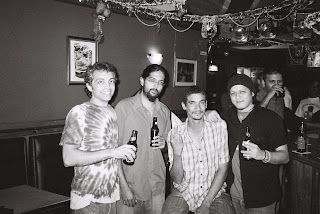 So this pic was taken a few years ago at Damon Homer's bachelor party.
From left to right (me, John Hussain, Brent (Bart) Kelshall, Damon Homer). We were all in the same form from 1985 - 1990. We didn't always get along, but by the start on form three onwards, we had a bond of music.
John, Damon, Brent along with Gerard Rajkumar would from GREEN and gig out from 1992 - 1995.
Bart doesn't play music anymore, in fact he hates musicians. He hates that he went Fatima College. But whenever I see him and we stand up and ole talk, I can't help but laugh my brains off.
Friday night, we bounced up each other at Shakers on the ave, and he asked me 'Franny? (my wonderful nickname from since Fatima days that he gave to me, and STILL calls me by that), Why did people say I was on drugs in school?'
And I said 'It's because of the way you talk Bart!, so sound drugged out'
The weird thing he's not, he's totally sober. Well, he had a drink in his hand at the point in time...but.....
Then he says to me 'You were always a geek in school, in fact you're still a geek Franny!'
I laughed my head off....
I hope Bart never changes.
Posted by Cesco Emmanuel at 2:27 PM No comments:

Sometimes things do come to you......Kobo Town comes to Trinidad 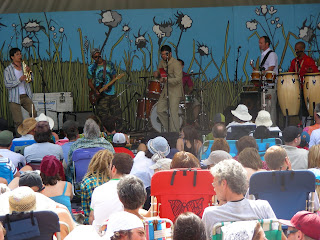 So this year had so much hope and promise to it. I was so looking forward to summer when I would hit the road again, this time just like 2009, I'd be in Europe. The plan was England, Sweden, Germany and hopefully, France. That was the plan! Yes indeed. June come quickly, I'm leaving on a jet plane, yes I am!

All this was being planned out since late last year with Kobo Town - the band that I still tour with from Ontario, Canada. (I know Ontario is a big province, but I can't really say the band is from Toronto nor Ottawa as half of the band members lives in each city. So Kobo Town is from Ontario! Why not? And I currently reside between Toronto and Trinidad, running a guitar program, and so we practice whenever we do meet up, but anyway, that's another blog post!)

So yes, as I was saying, the new album was being recorded and was to be released by Spring this year, and then we'd hit the road in support of it. That was the plan.

Instead what happened was delays and now the album is going to be released next year. That's the music biz for ya! So the tour got delayed....err....until the new album is out. I mean after all, we can't tour on our previous record, that's five years old now.

So, here I was just planning a 'lil trip up north for the summer, just to relax and visit some friends, when all of a sudden, the guys called to say 'Hey, guess what? The Canadian Embassy is flying down the ENTIRE band to Trinidad to play on Canada Day - July 1st at the Trinidad Hilton. And we're booking a few more gigs! So stick around man, we're coming your way!'

And so, I had to change my ticket. Oh well. That's life!

Now, I know it ain't no massive tour, but to be jamming with those lads on a stage again, and this time on my own stomping ground. I can't of a better way to start the summer. I've missed those miserable bastards. Every one of them.

We've toured all over Canada, various part of the US, Germany and Denmark, but we've never played Trinidad.

How cool is that?

Sometimes, when you least expect it, things do come you way!

Check us out online at www.kobotown.com

Posted by Cesco Emmanuel at 6:40 PM No comments:

Not really ever knowing someone

My uncle died last week saturday morning. Well, he was more like a cousin really, but with such a big age difference, I called him my uncle.

He was a really nice guy, who loved to garden. You shoulda seen his garden, it was a sight to behold.

He left behind a son and two daughters.

The amazing thing is, I never knew he had a son. I only found this out at his funeral. I also learnt alot from his eulogy. And it really does make you wonder.

Do we ever truly know someone? 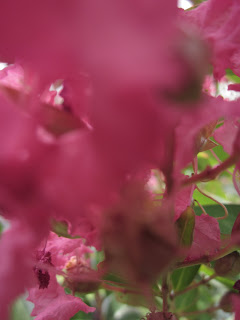 Posted by Cesco Emmanuel at 11:29 PM No comments:

Having fun un-wiring my mind

I realized that I've been doing something wrong for the last 37 years of my life.

It occurred to me like a month or so ago.

Now on one hand I can look at it as 'Man, I took so long to come to this awareness of what I've been doing wrong, why didn't I come to this conclusion sooner?' Or, I can say 'Wow! Here I am, 37 years of age, starting over with a clean slate, and I now know how to do the right thing' 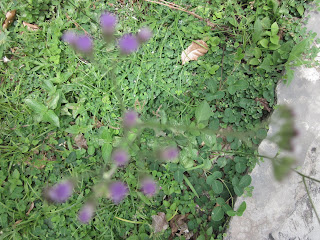 I'm going with option two. And you know what? Standing on firm ground for the first time in my life, is a great, great feeling.
Posted by Cesco Emmanuel at 11:26 PM No comments: