And the place goes wild by The Sonic Revival Project

Recorded between 2011 and 2014, this album is a collection of ideas I had. Some were riffs from a few year prior to recording, others came to me quickly and I just pressed the record button.

I had no idea what I was going to do with it, so I shelved it for a while.

I had asked a few friends to play on the recordings but the timing of the collaborations never materialized.

So, around Christmas 2019, I started adding drum tracks and then I borrowed a friend's bass to complete the recording.

Again, I shelved it till January 2022, when I finally had it mastered.

Next was finalizing artwork, which took a few months but finally here we are, a new album.

As it is heavy stuff, I am releasing it under the Sonic Revival moniker, as a sort of tribute to the late Andrew Moffat. Knowing Muff, he would have found this material a bit too left of center and he might have tweaked a few ideas. 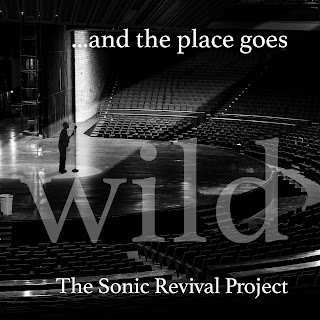 Posted by Cesco Emmanuel at 9:34 PM No comments:

For all the musicians who have left us

Many, many musicians have left us over the last few years, both internationally and at a local level here in Trinidad.

Some were close, close friends. Some deaths were natural, some were suicides.

The hardest part about losing someone close to you is that you never have a chance to properly say goodbye, especially when it's sudden. But then again, saying 'last goodbyes' is not something anyone does well.

And I don't think anyone plans their 'last goodbye speech'.

Every death, whether of a musician friend or an artist I admire has left a void in my life. And I naively thought that these people were going to be in my life for a long, long time.

And I know that I have been putting a benefit concert on hold for a long time now, the one for my oldest friend who died suddenly two years ago. And honestly, I know that it must be done, but emotionally, I'm not at that point where I can give it my best.

When you spend so many years with someone playing music and they're not there anymore, even though you're not in a band, it just feels so strange to continue playing the music you made together. It just brings back too many bittersweet memories.

Everything comes rushing back, almost as if on memory overload.

But I know I have to do it sooner or later. I know that I will have to put aside the pain and play the music of my teenage years.

But in the meantime, I'm brushing up my chops, practicing as often as I can and enjoying music in my own space.

And for all those who have left this life, thank you so much for your music.

May each and every one of you rest in peace.
Posted by Cesco Emmanuel at 2:56 PM No comments:

Summer is over, back to teaching...

So the summer tour is over. I was away for six weeks playing a handful of shows with Kobo Town, as well as a few jams and recording sessions with Chlorine Dream and my old mates from BOUND. I even did an improv jam with my cousin Zach Kellum in a yoga studio (I was drenched in sweat when it was over).

It was a great time seeing the wilderness of Canada, the mid-west and Niagara Falls. And as always, it is a true joy to go across the Atlantic to Europe. France is an amazing country - the food, the people, the history and the architecture. Germany is one of the few countries that got the entire concept of design and functionality right.

There were memorable shows and shows that weren't special in any way, but that's how it goes really.  We always tried to do our best and play our hearts out. One show we had to wait for a torrential thunderstorm to pass us by. One show in France saw us take four different trains and spend over eight hours travelling, but the view was amazing in the end.

We had a few days off after the first gig in France and we stayed in Paris, we walked everywhere and ate like kings, I think I had probably a dessert with every meal (I love you Cafe Gourmand).

The day before we left for Berlin, we took a train to Montpellier, ate in the town square, took a street car to the beach and jumped in the Mediterranean Sea, the temperature was absolutely perfect, and we all thought out loud, 'Yes! this is the life!'

The hardest part of the tour was flying out that early morning on the 18th back to Toronto, a connecting flight from Berlin to Zurich, then to Toronto, then drive in traffic to Niagara Falls and play a gig that night. The time difference and jet lag caught up with me while I was on-stage and I could feel myself falling asleep, even though we got through the gig pretty okay we were all tired from flying.

But all in all, it was a great summer!

Here were a list of Kobo Town tour dates...

And now that summer is over, it is back to school. I'm preparing all the different classes to sing Christmas carols for the last day of school. What a job! What a life this turning out to be.

Music teacher during the year, touring musician during summer.

Thank you God for the miracle of music and being with me on this journey called life.

Posted by Cesco Emmanuel at 10:05 PM No comments:

My head has been so hot with teaching this past year and a bit that I have only just started back gigging again.

I also have a handful of shows with Kobo Town in July and August so that should be fun, as it always is.

Hope to see you guys there….

Cesco
Posted by Cesco Emmanuel at 8:46 PM No comments:

The unsung heroes of our lives

You know, we all idolize the wrong people.

As kids, we plastered posters on our walls and bought magazines of our 'fav' pop or movie star.

Now as adults, we look at soulless, gutless, mind numbing TV shows and movies. Horrid 'reality' shows about disfunctional housewives, people with way too much money wasting it on nonsense and families that most of us would never emulate in our own home (the Kardashians for example).

And we spend hours wasting away, wishing our lives could be like this person or that, when we should turn off the TV and spend time with those closest to us - our family and loved ones. These are the people that will stick with you through it all. Not those damn movie stars.

The people who have helped mould us when we were younger - our teachers, get no credit at all.

Teachers are the building block of any society. Teachers make the leaders of tomorrow.

They should be the real heroes, not any 'star', because we try to look up to these people and they don't even know who we are, they know nothing about us and in truth, we don't know anything about them either, only the facade that they put forward on TV, on social media and it really is a very good lie.

Most of the people we idolize and admire live very messed up lives. Do you want to live a messed up life?

Start admiring those people who know you and want the best for you.

They are the real heroes of your life.

Posted by Cesco Emmanuel at 12:36 PM No comments:

When I first heard these lyrics 'He said I fabulously rich, c'mon just let's go, she kind of bit her lip, jeez I don't know', I was hooked.

That was the summer of 1995 and the band was Tragically Hip, a group out of Ontario, Canada.

The album was 'Day for Night' and I played that tape so much that it warped. I rewound that first track 'Grace, too' over and over until I knew every little bass tweak and vocal nuance that Downie made  coming down to the end. There were no lyrics at the end but Downie was sort of, well, it's hard to describe unless you listen to the song. He wasn't saying 'Yea, or Awww' or anything audible for that matter, but somehow the song has so much intensity at the end. Not to mention it was so bloody groovy.

I just fell in-love with that song, the album and the band after that.

I bought a few more albums and they unofficially became my summer Canadian fling. There was something gritty and easy-going about them and I loved Downie's lyrics and his way of just saying words almost as if he was having a conversation with me, the listener.

My one regret is that I never saw them live.

My heart broke last year when I found out he was diagnosed with cancer, and like so many music lovers, musicians and Canadians all around the world, we all felt a huge sense of loss when Gord passed away on October 17th, 2017.

So many great musicians have left us over the past few years and while I shudder to think of who we're left with, I know one thing for sure, Gord Downie's musical legacy will forever live on.

It is a huge loss for the Hip, it is a huge loss for Canada. Gord Downie will forever be one of the great Canadian songwriters. And though it will never ease the pain for your family, I just wanted to say 'thanks so much for the music, Gord, may you rest in peace and may God be with you on your next journey'.

Posted by Cesco Emmanuel at 8:56 AM No comments:

♫ A Spanner in the Works - Cesco. Listen @cdbaby

♫ A Spanner in the Works - Cesco. Listen @cdbaby: Click to listen at CDBaby
Posted by Cesco Emmanuel at 10:39 PM No comments: